Everyone is on a food journey.  This is ours. 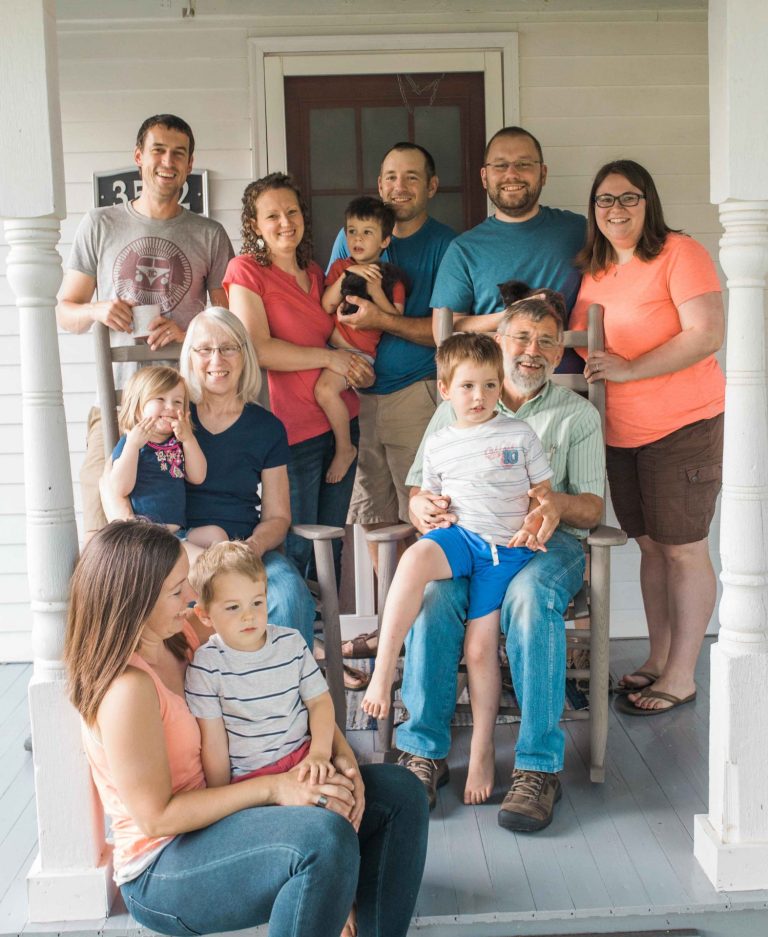 Our family is proud to be 3rd and 4th generation caretakers of this piece of God’s green earth.

In 1921, purchased 80 acres of land near Yoder, Kansas. For the next 57 years, first Levi and then his son, Allen, farmed the land in a very conventional manner. They raised crops and cattle. In 1978, Allen’s son, Ken, took over the farm and continued the tradition of conventional crop and dairy farming.

One day while loading manure by hand, Ken took a break and observed that his cows had four feet yet were standing around, while Ken, with only two feet, was doing all the work. He realized that something must be wrong. Building some electric fence, he opened the gate and turned the cows out to pasture to harvest their own food and spread their own manure. Both Ken and the cows were much happier.

Building upon this experience, he continued to plant grass, build fence, and install water lines to allow year-round grazing. By 1991, the whole farm had been planted to grass and Ken stopped using fertilizers and herbicides. The cows were moved to a fresh paddock of grass every day. Because the cattle were living in a stress-free environment, vaccinations and wormers became unnecessary.

In 1993, Ken began seasonal dairying, calving in the spring and drying the cows off in the fall. By 1996, the cows were so adapted to grass that Ken completely stopped feeding grain. He also began allowing the cows to raise their baby calves on pasture until they were weaned. During the transition from traditional- to grass-based dairying, Ken continued to sell Grade A milk to the dairy co-op.

When Ken made the switch to total grass with the dairy cows, he needed lots of fences for the very tight rotational grazing required. Being trained in mechanical engineering, he built in his shop whatever was needed for any given project. When he finally found what he wanted in semi-permanent fencing, he helped re-engineer a superior product line called the “EZ-End.”

When the family started raising chickens, Ken went back to the shop to engineer a customized plucker and scalder/dunker. Always striving to improve what was built, he tested and rebuilt and retested until he had a satisfactory product. After several requests from friends for processing equipment, Ken added this to the manufacturing line.

In 2001, after losing a quarter section of rented land and being forced to reduce the size of his dairy herd, Ken took a step of faith and began retailing raw dairy products from the farm. The first year, he made and sold mostly grassfed butter until the demand for raw, fluid milk increased. This complemented the established market for fresh, pastured poultry, which the children had been raising and selling during the summers for eight years.

In 2004, son David figured out how to successfully freeze milk, which allowed year-round sales, even though Ken only milked six to eight months each year. Ken purchased a walk-in freezer and began expanding the variety of products to include grassfed beef and pork.

In 2005 after graduating from college, son Daniel came home to join the farm operation. He took over management of the poultry and pork production and added turkey and lamb. Ken and Daniel added a layer flock to the farm to begin retailing eggs.

In 2010, daughter Kendra officially joined the family business to work with communications and marketing. She also began to explore catering and events on the farm utilizing settings such as the barn hay loft, lush pastures, and river woodlands.

In January of 2015, Ken’s son and daughter-in-law, Daniel and Robyn, took over management of the farm.

The family continues to work together to expand and diversify product lines. We pledge to continue producing the highest quality food possible without the use of synthetics, chemicals, or genetically modified ingredients.

This is our story.

We strive to produce the healthiest food possible so that our customers can enjoy a sustainable lifestyle. Our business will honor God, respect creation, and operate with integrity.